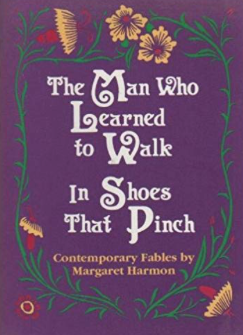 Summer is coming, and this is the perfect bread-and-butter present if you're someone's weekend house guest.

If your stepmother by marriage has a birthday coming up, this little book is swell. If someone at the office--not the president of the company, but the young kid who gets stuck with all the dirty work--has a bad day, this is the talisman to cheer him (or her) up. If you're giving a ladies' lunch and you're sick to death of those flowered centerpieces with the numbers underneath them for door prizes, put out this little book instead, together with a pony pack of lilac, and you'll be all set.

In short, "The Man Who Learned to Walk in Shoes That Pinch" is the perfect present for this summer.

I hope I may be forgiven for saying that the book even looks pretty--a purple cover with art nouveau flowers and lettering, and an old-fashioned green ribbon to use as a bookmark.

Now one thinks of another function for this volume: every bed-and-breakfast owner should stock up on half a dozen of these to put next to the guest book or the sherry decanter--open invitations to your guests to while away two or three hours reading about the plucky squirrel who was raised in a pig sty, or "The Rug Weaver and the Collector" or "The Spider Who Had Potential."

There is something hedonistic and luxurious inherent in these fables. They're not out to prove or improve anything. They're on the page for the reader's leasure, inviting as a slice of fresh sponge-cake or a sip of that sherry mentioned above.

Most pleasing of all, although the writing is clever, attention is never directed to the author; your mind is always on "The Fly" or "The Toad Who Knew It All" or "The Hare and the Tortoise."

Some of these fables are very short and to the point: for instance the Toad, who knew it all, put his knowledge in one big book. He couldn't see where he was going, naturally, so he fell in the river and died. It takes more than knowledge to live in this world today; you have to have common sense and a good heart.

The Fly lives in the home of a single lady and works out a system where he buzzes around every day until the lady takes one tremendous swat at him and misses, and the rest of the day goes on without incident.

The other flies in the house sneer at this kind of appeasement. They are, or might characterize themselves as, fly activists. They insist on fighting for fly honor.

How our hero-fly extricates himself from this sticky situation makes a sweet story.

The Hare and the Tortoise appear here again in a modern reprise of the Aesop fable in which the villagers place their bets, once again mulling over respective virtues of these two symbolic animals.

Hare is speedy but has that notoriously short attention span; Tortoise is a plodder but steady. The author interjects a couple of other story points: What if Hare gets too distracted by doing good deeds? What if Tortoise has a shell that rubs uncomfortably on his tender shoulders? What if they're very good friends? Who thought up this dumb race in the first place? Are Hare and Tortoise fated forever to go through the motions of someone else's crack-brained scenario?

The relative advantages of accommodation and confrontation are appraised in these tales. When is it wise to bend to another's will or the larger peer pressure of society? When is it best to stand up for your rights?

In "The Short Man and His Tall Wife," the beautiful wife bends and bends so that she can always "look up" to her husband. He's kind of a jerk and won't stand up straight, so she ends up in a contortionist's position, always staying under a man who keeps slumping. Not a good idea.

The fellow in the title fable, "The Man Who Learned to Walk in Shoes That Pinch," because "nobody likes a complainer" is inadvertently given a pair of shoes too small for him. He--by bending over, holding his breath and curling his toes--manages to get around, but he pays a terrible price.

Other stories here--the headstrong house mouse who perishes from a diet heavy in cholesterol, the elephant and the rhino who get married and learn to get along despite their differences--are charming.

My favorite is "The Three Wishes," which suggests that if you live carefully and kindly, you don't need three wishes.

Or, put another way, you don't have to waste your time wishing; you can probably get a lot of what you want by living the considerate--and considered--life.

Look around for this book. You'll find it useful in countless social and literary ways.